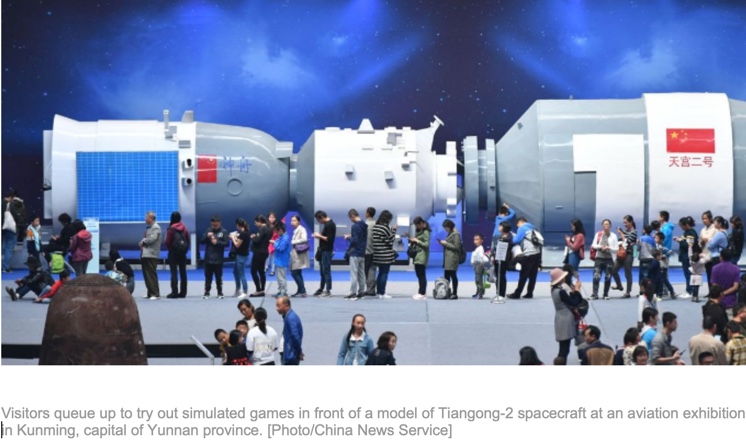 The State-owned space and defense company has over 170,000 employees, 8 own acadmies and a dozen listed companies. In revenues, it is number 4 in the world after Boeing, Airbus and Lockheed Martin. It is involved in the following activities.

Space missions.From 1978 – 1989, China conducted 16 space missions and all of them were satellite launches. During the 1990s, 39 carrier rockets were launched, and the last of them carried the first prototype of the Shenzhou spacecraft into space, opening China’s manned space age. From 2000 to November 2012, a total of 111 rockets sent hundreds of satellites, four manned spacecraft with eight Chinese astronauts as well as one space laboratory into space. In the past 6 years, 124 space launches were carried out.

Rockets. As the strongest and most technologically sophisticated rocket ever made by China, Long March 5 has a liftoff weight of 869 metric tons, a maximum payload of 25 tons to a low-Earth orbit, or 14 tons to a geosynchronous transfer orbit. The gigantic vehicle is tasked with transporting parts of China’s future manned space station and fulfilling Mars explorations.

Lunar and Mars missions. CASC started sending robotic probes to the moon in 2007 and carried out several lunar missions since then. It landed the Chang’e 3 probe, which carried the first Chinese lunar rover on the moon in December 2013. The company launched a relay satellite into space in May as the first step in the Chang’e 4 lunar mission, which will explore the far side of the moon and is scheduled to be made before the end of this year.

Navigation and positioning satellites.CASC has been working with Chinese space authorities to set up a vast navigation and positioning satellite network and a high-definition Earth observation satellite system. The Beidou network, mainly constructed by CASC, is one of the four space-based navigation networks along with the United States’ GPS, Russia’s GLONASS and European Union’s Galileo. Since 2000, when the first Beidou satellite was launched, 42 satellites have followed and several in them have already been retired. Beidou began providing positioning, navigation, timing and message services to civilian users in China and parts of the Asia-Pacific region in December 2012. China has planned to place 18 third-generation Beidou satellites into space before the end of 2018. According to government plans, the network will be made up of 35 satellites before the end of 2020 to give Beidou global coverage. CASC also cooperates with space departments in designing and establishing a space-based, high-resolution Earth observation network that has had eight satellites.